Although comics is a dialogic form, current academic work on comics has remarkably little to say about the possibility of genuinely dialogical creation, that is, collaboration. The bulk of recent scholarly work on comics favors the concept of cartooning as a singular personal handwriting, i.e. an autographic trace, ignoring the historical importance and artistic potential of multi-authored comics. This panel seeks to illuminate this blind spot in comics studies by bringing together diverse critical perspectives—rhetorical, literary, aesthetic, and ideological—on the processes and consequences of collaboration.

1. “Multimodal Composition and the Rhetoric of Comics: A Study of Comics Teams in Collaboration”

Though scholars of writing have long touted the rhetorical potentials of multimodal composition, few outlets have analyzed the collaborative processes behind such texts. Comics, as multimodal texts often composed in collaborative settings, are rich sites for the study of writing processes. This paper, drawn from qualitative case studies, discusses the work of three comics teams, with focus on the collaborative strategies that facilitated each text’s successful production. These case studies entailed interviewing each writer and artist, examining documentation of their collaboration, and considering the final texts. The results reveal the collaborative nature of comics composition and highlight the authors’ identities, motivations, artistic tools, and knowledge of generic norms. In addition, they offer findings relevant to writing pedagogy, technical communication, and alternative comix. While case study methodologically does not allow for generalization, together these studies stand as a reminder of how widely varied and richly rhetorical comics collaborations can be. Studies of comics authors and their composing processes suggest new avenues of research for scholars of collaborative writing, writing processes, identity theory, multimodal composition, cultural studies, and critical race theory.

2. “‘A Story Lived, Photographed[,] Told[,] Written and Drawn’: The Dance of Pen and Camera in Guibert and Lefèvre’s The Photographer“

Emmanuel Guibert’s The Photographer (2003-2006, English trans. 2009), which tells the true story of French photojournalist Didier Lefèvre’s 1986 trip to Afghanistan, demonstrates a successful yet complicated collaboration between not just two artists, but two forms of images: comics and photographs. The book brings together Lefèvre’s recounted memories and the pictures he took; a first-hand account and the artist Guibert’s imagining of it; journalism and an adventure story; hand-drawn images, photographs, and text. The extensive use of photographs, not just as occasional emphasis for certain themes or sub-sections, but as a separate narrative element in their own right, makes this graphic narrative a key case study for examining both the collaboration between artists and the expanded possibilities for comics to combine different kinds of images. This paper examines how the book’s juxtaposition of photographs and graphic images complicates notional boundaries between image(s) and text, fiction and nonfiction, as well as the concept of authenticity in artists’ collaborative translations of physical environments into aesthetic spaces.

3. “The Problem of Collaborative Authorship in the Comics Jam”

For several decades, cartoonists have conducted and occasionally published “jam” comics, as social entertainment and as experiments in collaborative authorship. The usual practice of a jam is that multiple cartoonists pass an accumulating narrative from one person to the next without discussion of its trajectory, so that each new contributor can reframe, rebuke, tweak, or continue the ongoing story. Other constraints have been placed on some jams, such as the Spiegelman and Sikoryak-edited Narrative Corpse (1995) and its current online sequel-in-spirit, Infinite Corpse, curated by Aaron Renier and the Chicago artist collective Trubble Club, but the principle remains the same: a text without a single author, and indeed without unified authorial intention. As such, jam comics present a compelling proving ground for Barthesian claims about the separation of the author from the text, or Foucauldian ideas about the social construction of an author-function in the absence of an actual author. Readers’ frequent frustration with jam comics must come partly from thwarted reading expectations, as they seek unified authorial design and find instead practices of self-mockery, self-misunderstanding, and self-negation. Arguably, though, the reader’s problem is not merely a desire for an absent author, since we come to a jam knowing that it is the product of disparate hands; rather, jam comics often fail because the reader desires or can imagine a better turn, a more interesting authorial intervention, than the one the (current) author has taken. This active readerly process of authorial construction (and author-projection) should shed an unsettling light on our way of thinking about authorship more generally, especially collaborative authorship: if the “author” of a comic is negotiated in the process of reading, then mustn’t From Hell, for example, really have a different author from Watchmen or Lost Girls?

4. “Collaboration as Consciousness Raising: The Bodies of Feminism in Wimmen’s Comix”

In fixating on a single hand that holds the pen, comics studies directs its focus inward towards the page, privileging formalist aesthetics. However, by considering multiple creators alongside each other, we can not only open up the page to multiple bodies, but also move past the page. Through an examination of the Wimmen’s Comix underground comics collective, this paper explores how a methodology of collaboration invites a more socially engaged analysis that connects comics to other discourses.

Although comics studies has thrived in recent years, none of the women primarily engaged in the Wimmen’s Comix collective have yet been deemed worthy of extensive individual study. After all, many of these women produced mainly in never-collected short formats. Thus, when underground comics are mentioned, the varied and vibrant feminisms of nearly 100 artists over Wimmen’s Comix‘s two-decade run are often undercut by alluding only to the group╒s most prolific creator and advocate, Trina Robbins. Moreover, in its collective structure, rotating editorship, political bent, and publishing duration (1972-1992), Wimmen’s Comix much more closely approximates various feminist journals than the predominantly male underground comics that overshadow it. How is collaboration a feminist act, and how does such politics shape what we see on the comics page? 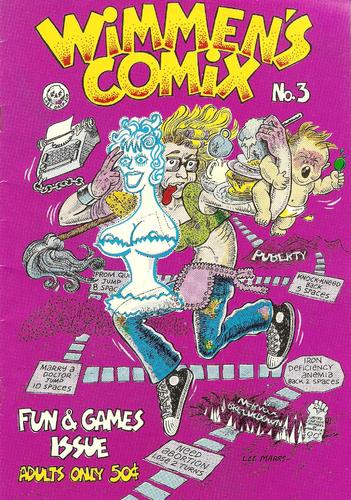