By: Margaret Galvan
In: 2014, Abstracts, Other Comics Events @ MLA

The MLA Annual Convention for 2014 takes place in Chicago next week, from Jan. 9th to 12th! We of the Discussion Group on Comics and Graphic Narratives are pleased to help promote, in addition to our own programming, the following session organized and put on by our colleagues in the Division on Nineteenth-Century American Literature: 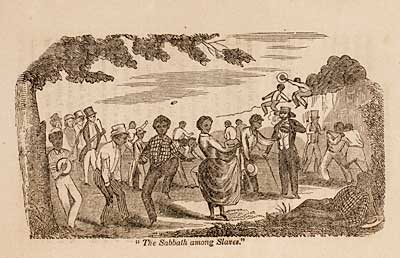 “The Graphic 19th Century” reframes the print explosion of the era as a revolution in graphic narratives, treating the relationship between word and image as a distinct innovation of the period marked by The Adventures of Mr. Obadiah Oldbuck (1842), the first graphic novel published in the United States, and graphic work popularized in periodicals from Harper’s Weekly to Frank Leslie’s Illustrated Newspaper. This panel revises critical commonplaces that link the explosion of print media with the impact of the photographic image; rather, panelists will interrogate the dialogic relationship between word and image, finding a myriad of results beyond what Isabelle Lehuu (2000) aptly called “the carnival on the page.” Papers in this session seek to redefine the field through a coordinated focus on the interaction of form and formats. Each paper focuses on a different generic form out of which both word and image emerge. Together the papers demonstrate combinations of word and image beyond the range of possibilities typically taken up in earlier studies of the period; in addition,they offer new considerations of 19th-century print culture as extending across race, gender and age, and ability.

1. “A Slave Is Being Beaten: Word, Image, and the Subject of The Life and Adventures of Henry Bibb“

This paper focuses on the prefabricated woodcuts featured in the nonfiction narrative The Life and Adventures of Henry Bibb (1849), exploring the tension between the text’s first-person narrative—known within the tradition of the slave narrative for its radical expression of agency—and Bibb’s use of printers’ woodcuts instead of original illustrations. Here unoriginal images are used for a very original purpose, conveying complex and multivalent modes of agency.

2. “Geography and Tactile Graphics for the Blind”

This paper further explores multivalent modes of word and image by considering atlases of the 1830s and ’40s developed for the blind. It compares two atlases from the early nineteenth-century US—one for the blind, Samuel Gridley Howe’s Atlas of the Principal Islands of the Globe (1838), and one for the sighted, Howe’s Atlas of the United States (1837)—as against Jedidiah Morse’s widely used Atlas to Morse’s New School Geography (1822). Using these graphics for the blind, the paper seeks to defamiliarize the relationship between word and image, and thus better analyze how words and graphics combine (or may not) in maps and other printed media. These graphics for the blind provide a peripheral but illuminating example of how nineteenth-century writers thought about the power of images and their wordy supplements.

3. “‘The Girl Who Inked Herself’: The Graphic Design of Female Literacy in Picture-Book Form”

This last paper turns to children’s literature, arguing that a picture book’s graphic narrative may not complement a written text but rather compete with its message. In the picture book The Girl Who Inked Herself and Her Books, and How It Ended (c. 1859), the illustrations dominate the first page, swallowing up the text. Having the whole story laid out visually on the first page means that “How it Ended” is prefigured from the start. The reader is forced to catch up with the text of the story on the next page in order to learn an ending that the viewer already knows. This paper shows how the format of picture books signals that visual lessons are just as important as the text, if not more so. 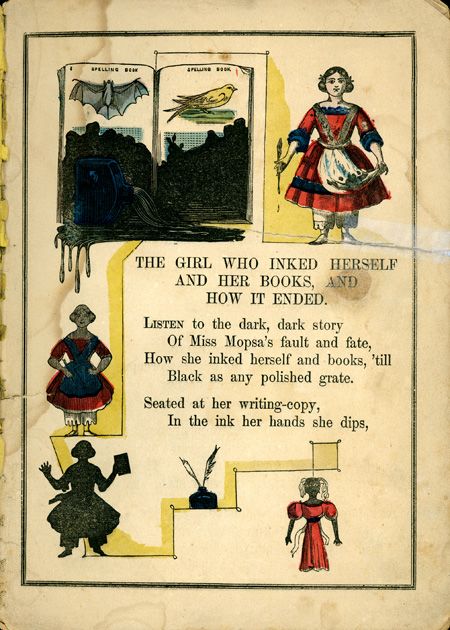