1. “(In)Visible Bodies: Rewriting the Politics of Passing in Incognegro, a Graphic Mystery by Mat Johnson and Warren Pleece”

How can passing across racial lines be described and conveyed in the comics form? Can the medium develop specific strategies to comment on the themes of transgression and crossing inherent to the trope of passing? This paper shows how the graphic novel Incognegro (2008) goes beyond the traditional socio-historical analysis of passing and plays thematically, generically, and visually with the politics of the trope. Incognegro, set in the US in the early 1930s, depicts a light-skinned African American reporter who passes for white in order to investigate lynchings of blacks in the deep South. Because white papers do not consider these events to be news, the reporter condemns these dreadful acts in the column titled “Incognegro” that he writes for a New York-based newspaper, The New Holland Herald. Thus he risks his life using his “passing abilities” to protect the rights of the community he is trying to defend from white hegemony. In this way, Incognegro challenges the conventional tragic mulatto figure that passes for white to avoid racism and violence or to improve his/her social status. In addition, it echoes the common black trickster figure who practices “masking” to outwit his enemies or opponents, and calls into question the biological, social, and cultural representations of race as perceived by the white dominant group. Here the racial passer functions as an “outsider from within” who can challenge the black vs. white binary model. Moreover, the text subverts narrative paradigms from superhero comics and detective fiction to point out the arbitrariness of racial ideologies and the fallibility of notions of justice and truth. This subversion is further complicated by the comic’s “color free” art (black and white, sans halftones or gray tones), which defies essentialist representations of race. In sum, Incognegro argues that the ambiguities of racial categorization are best represented through a similarly ambiguous literary genre—one that not only challenges generic norms and traditions but also “writes back” to both the mainstream and alternative wings of American comics production.

2. “Birth of an Imperium: Tragedy, Comedy, and the Graphic Representation of African American History”

Both Sutton Griggs’ 1899 novel Imperium in Imperio: A Study of the Negro Race and the 2004 graphic narrative Birth of a Nation speak to the persistence and generative power of state-sanctioned racism. These rogue texts challenge the official construction of “societal racism codified into law” (Gloria J. Browne-Marshall), at once chronicling the social conditions that produced such flawed legal reasoning while also positing the construction of utopian spaces where true equality might finally be achieved.

Imperium in Imperio describes a nation organized to defeat the aspirations of Black Americans, in part by restricting African American political participation. This corrodes the spirit of American democracy, for the practice of “cheating the Negro out of his right to vote…was unjust to the Negro and fatal to the morals of whites” (26). The novel’s protagonists find hope in the Imperium, a secret society that intends to realize the promise of American democracy by seceding from the United States and establishing an all-Black nation; yet the novel ends with the Imperium betrayed, an admission that Black Americans must struggle to reform America from within. Birth of a Nation, a collaboration between Aaron McGruder, Reginald Hudlin, and Kyle Baker, share this theme, suggesting that the integration of African Americans into the larger American polity remains, in the words of Langston Hughes, a dream deferred. However, Birth is a Janus-faced text that simultaneously supports and undermines such a reading: it is a comic revision of Imperium that uses conventions unique to comics to commemorate (while commenting on) the emancipatory artistic tradition that helped sustain African Americans into the twenty-first century. If Imperium functions as tragedy, lamenting the perseverance of American racism, Birth mocks the continuing marginalization of Blacks by a nation that ought to know better. This progressive and hopeful attitude invokes two forms of cultural critique: on the one hand, a comic tradition that seeks (in Michael Chaney’s words) to “understand the triumphal efforts of redress and revision inherent to Black representations of Black experience”; on the other, a comic tradition that springs from (as Glenda Carpio remarks) “a wrested freedom, the freedom to laugh at that which was unjust and cruel in order to create distance from what would otherwise obliterate self and community.” Indeed, Birth of a Nation merges these two distinct forms of cultural critique.

3. “A Work of Its Time and a Timeless Work: The Spirit, Ebony White, and Will Eisner’s Legacy”

While scholars, historians, and fans agree that Will Eisner’s The Spirit was a groundbreaking series, especially in regard to narrative and visual storytelling, the series yet poses problems for contemporary readers through its caricatured and stereotyped depiction of racial minorities, especially the Spirit’s African American sidekick, Ebony White. Because The Spirit has been reprinted almost nonstop for decades, readers have struggled continuously between respect for Eisner’s innovations and influence on the one hand and rejection of his regressive racial stereotyping on the other. Eisner himself struggled with this tension and the impact it would have on his reputation, a struggle evident in the public responses he made to criticisms of Ebony White—from the early Kitchen Sink and Warren reprints through Eisner’s own challenging of Jewish stereotypes in his late work. This paper examines the public discourse surrounding the controversy over Ebony White, including Eisner’s revivals of the character in new work starting in 1966, letter column debates among readers and editors that occurred in the Warren magazine reprints of the 1970s, Eisner’s recollections of his own changing attitudes toward racial stereotypes while he was producing The Spirit, and later apologies and explanations by Eisner scholars, biographers, and supporters who have tried to strike a balance, treating The Spirit as both a work of its time and a timeless work.

From the 1960s to the present, the image of Ebony White has remained visible to generations of readers. As Eisner lived to see audiences’ reaction to Ebony change, he was forced to adjust his public image and personal history in order to control the potential damage to his reputation. In these responses, Eisner vacillated between defensiveness and apology. His later responses refashioned or revised the history of The Spirit as a work that broke new ground in the positive depiction of African American characters, especially through the introduction of the black detective named Grey, who assisted the Spirit on a couple of adventures. Eisner asserted that he recognized the problems with Ebony White’s depiction soon after returning from World War II and immediately began adjusting the character’s speech and appearance, while also creating more realistic and positive black characters. Biographers and historians (e.g. Andelman, Schumacher, yronwode, and Greenberger) have reinforced this assertion to varying degrees in their own assessments of Eisner’s career. However, Eisner’s relation to racial caricature is more complicated and ambivalent than this progressive narrative maintains. Therefore, without settling for the obvious—that readers’ tolerance toward racial stereotypes has decreased since 1941—and without seeking to condemn Eisner as a racist, this paper traces the often contentious trajectory of a creator and audience coming to grips with a revered but troubling creation. 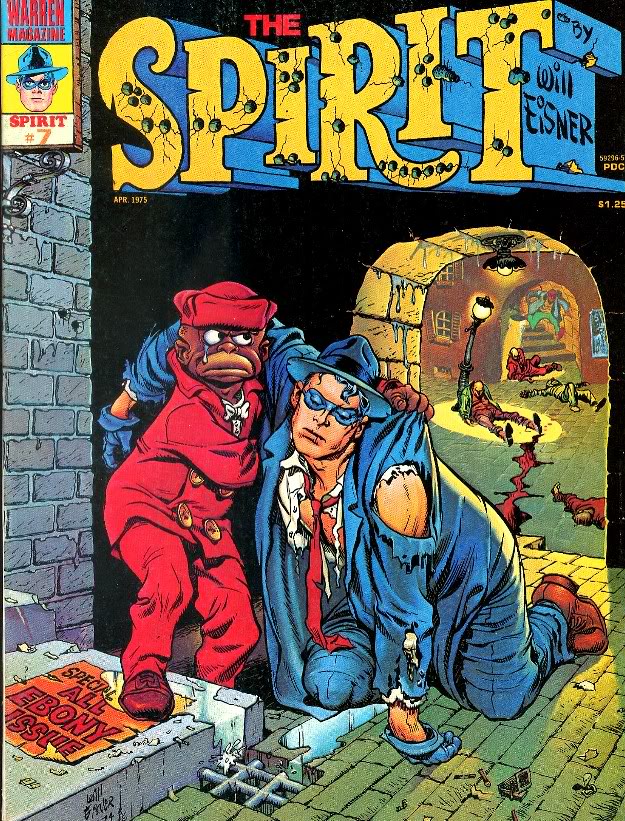