Comics: Philosophy & Practice @ U of Chicago

By: Margaret Galvan
In: News 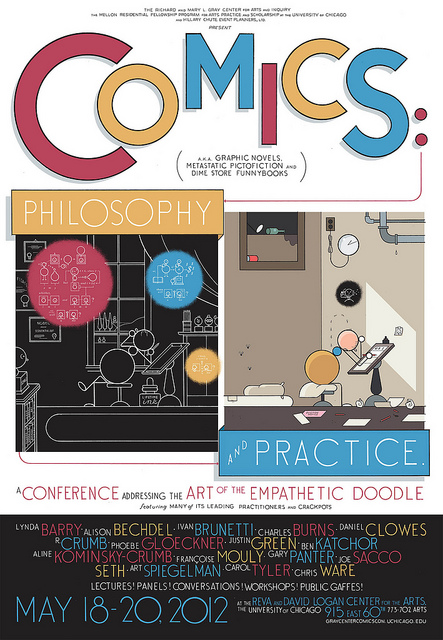 This weekend, May 18-20, thanks to the tireless work of our own Hillary Chute, the University of Chicago‘s newly established Gray Center for Arts and Inquiry is hosting:

Comics: Philosophy & Practice—a symposium that brings together what is certainly the most distinguished roster of comic artists ever assembled for an academic event:

Wow! These artists will be doing talks and workshops, interviews and panels, throughout the weekend. It all starts tonight, Friday, May 18, at 6:15 p.m. CDT with Art Spiegelman’s What the %$#! Happened to Comics, a conversation with U of Chicago’s distinguished W. J. T. Mitchell. It comes to end on Sunday, May 20, from 2:00 to 5:00 p.m. with one of Lynda Barry’s famed Writing the Unthinkable workshops. In between, it looks like one can’t-miss event after another. Also taking part as interviewers/moderators are other distinguished U of Chicago scholars, including Kristen Schilt and, of course, Hillary Chute herself.

For those of us who can’t attend the conference in person—sob!—UChicago Live will be holding real-time webcasts of much of the event, starting tonight (Friday) at 6:00 p.m. CDT with opening remarks and the Spiegelman/Mitchell event. Other webcast times include all of Saturday, from 9 a.m. to 7:15 p.m., and Sunday from 10:30 a.m. to noon.

Comics: Philosophy & Practice clearly signals not only the arrival but the current stature and seriousness of comics studies in the academy. Co-sponsored by the Gray Center, the Franke Institute for the Humanities, the Scherer Center for the Study of American Culture, the journal Critical Inquiry, and a number of other U of Chicago entities, it represents a vast collaborative effort and a hugely important public proclamation of comics’ relevance and indeed centrality in the study of the humanities.

It all takes place at the just-opened Logan Center for the Arts, a multidisciplinary arts center and a major new U of Chicago venue (in fact the conference is part of the Logan Center’s preview period, the run-up to its grand opening in the fall). 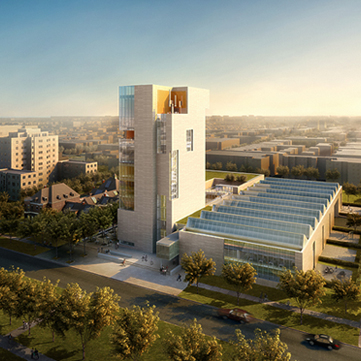 Congratulations to Hillary Chute and her colleagues at the University of Chicago for assembling this historic event!

PS. The conference’s website is a terrific one-stop compendium of information about distinguished comics artists, so much so that it could serve as a useful starting point for assignments in a comics course!