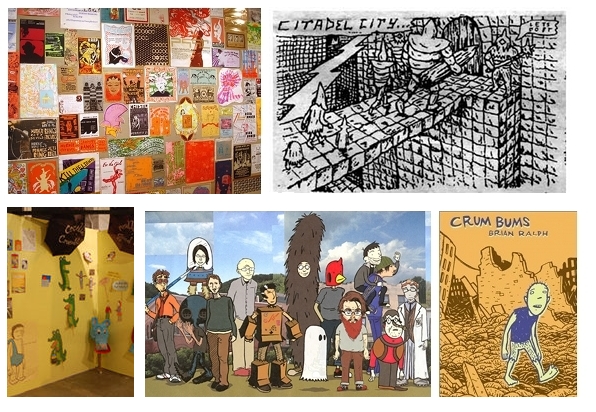 Call for Papers for a proposed panel at the Modern Language Association (MLA) Annual Convention, 3-6 Jan. 2013, in Boston. Sponsored by the MLA Discussion Group on Comics and Graphic Narratives.

…
Even as literary culture makes way for e-Readers and iPads, an opposing DIY trend champions the tactile, material qualities of printed books, flouting conventional economic wisdom and celebrating the haptic potential of reading. Indeed one effect of the digital revolution has been to highlight the virtues of pre-digital reading, turning attention to the book as art object and artifact. One expression of this phenomenon is the interest in handmade or limited-edition readable objects, not only lavish and collectible artists’ books but also more accessible small-press publications such as zines and minicomics.

New England has been a vital center for DIY comics and zine production. Notably, the former publisher Highwater Books, founded in Massachusetts, served as an aesthetic benchmark for small-press comics in the late 1990s. The Providence-based artists’ collective Fort Thunder, known for minicomics, installations, performance art, and music, coalesced around the Rhode Island School of Design in the nineties and launched the careers of important artists like Mat Brinkman, Brian Chippendale, and Brian Ralph. Small-press shows such as the Massachusetts Independent Comics Expo, or MICE (http://www.masscomics.com), carry on the handmade comics tradition, aided by regional bookstores that promote individualized comics, such as Cambridge’s Million Year Picnic and Providence’s Ada Books. Also, the Center for Cartoon Studies, a highly regarded comic art school located in White River Junction, Vermont, stresses self-publishing (http://www.cartoonstudies.org).

We invite papers that explore the DIY culture of comics from Boston and New England more generally. A few questions to consider:

Send 500 word abstracts in .doc or .pdf form to Martha Kuhlman: mkuhlman [at] bryant [dot] edu. The deadline for submissions is 10 March 2012. Submitters will receive notification of results from the Discussion Group on Comics and Graphic Narratives by no later than April 1.

PLEASE NOTE: This CFP is for a proposed, not a guaranteed, session at MLA 2013, meaning it is contingent on approval by the MLA Program Committee (which will make its decisions after April 1). All prospective presenters must be current MLA members by no later than 7 April 2012.

Please feel free to leave comments on this site, or to email Martha Kuhlman at mkuhlman [at] bryant [dot] edu if you have questions!