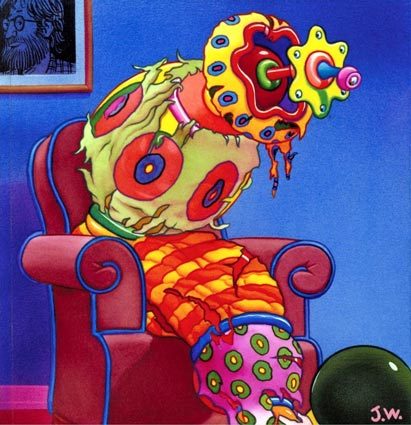 Lynda Barry moved to Seattle from Wisconsin as a child, and though she has said she “never was happy” there, she returns to the city time and again in her work, particularly in her long-running strip Ernie Pook’s Comeek and her semi-autobiographical collection One Hundred Demons. This paper explores how Barry chooses to render Seattle through her comic art and how the city influences the lives of the characters, including the artist herself.

Barry moved with her parents and brothers to a “racially mixed, lower-middle-class neighborhood” in Seattle in 1961, and it was there that she spent her formative years. This area haunts Barry’s works as an adult. Ernie Pook’s Comeek, which she penned for nearly thirty years, offers a rich, layered portrayal of a Seattle-based family, including brother and sister Arna and Arnold Arneson and their cousins Marlys, Maybonne, and Freddie Mullens. They aged little if at all over the years of the strip, yet they encountered rape, incest, bullying, neglect, brutality, homophobia, and, sometimes, a modicum of joy as well. Though pinpointing exactly when Ernie Pook takes place is difficult, it seems to occur around the time of Barry’s own childhood, in the late sixties and early seventies, with occasional jumps to contemporary moments. The setting, though it may feel general enough to be relatable to a wide audience, is clearly Seattle, as established by the numerous Pacific Northwest references. Ernie Pook’s Seattle is defined by socio-economic class: the children and their families suffer in rough neighborhoods, unsupervised, while mothers work at dead-end jobs. Fathers are largely absent, and the children do the best they can to be children in a bleak and desolate landscape marked by poverty and despair.

Barry revisits Seattle in her autobiographical strip collection One Hundred Demons (2002). The book focuses on her girlhood as mediated through her memory and her skills as a writer and artist, suggesting an archival record of personal history seen through the lens of time and technology. Demons frames and constructs Barry’s life, revealing a dark, disturbing childhood that the narrator ultimately survives. In this return to her hometown, Barry explores in greater detail the racial and ethnic tensions that marked her as “other,” as a Filipino-Irish-Norwegian girl with pale skin and red hair who could, and frequently did, pass as white. Barry also continues her examination of class divisions in Seattle, and how the scars brought by childhood traumas still haunt her, although she is many years and many miles away. Seattle is, for Barry, the city she can’t quite leave behind.

Roberta Gregory’s Naughty Bits (forty issues, 1991-2004) originated as a parody of the Fantagraphics’ Eros line of “pornographic” comics and evolved into a feminist series that influenced many of the comics by women that followed. This paper will examine Gregory’s roots in the underground comix of the 1970s–including contributions to Wimmen’s Comix and her own title Dynamite Damsels, which chronicled second wave  feminists in 1976–and how she satirized first the Seattle comics scene and then subsequent broader topics. Early issues target the sexist misogyny of Fantagraphics Eros comics, the masculine culture of the alternative publishing scene, and the earlier tradition of male-created underground comix by Crumb, Wilson, and Green in which women are treated sexually in a violent and degrading manner. The first episode of Naughty Bits turns the tables on a comix-reading husband and depicts a wife joined by a group of her angry friends who all participate in sexually mistreating the husband just as the women are treated in the comix he has been reading. The husband’s defensive comments (“This is Classic American Literature”) are countered by the women’s remarks, which range from addressing creator struggles (“Women have a HELL of a time getting into print at ALL an’ this sort of stuff gets reprinted all the TIME!”) to larger societal critique to inter-personal dynamics. Gregory combines feminist social commentary with depictions of graphic sexual acts rendered in a cartoonish expressionist style. The sexual imagery is complicit with the critique. Thus established as cutting-edge commentary, at least in the comics community, Naughty Bits went on to explore many of the topics that have come to dominate the recent comics boom: coming-of-age sexuality; historical periods, particularly the era of second wave feminism; illness management, such as cancer treatment; and even eldercare.

Awaiting the next part of a serial is customary for comics readers, and we can differentiate various modes of waiting for various types of comics. Seattle-raised artist Charles Burns elicits a paradoxical kind of anticipation, since his finished serial work has expressed profound narrative ambiguity. Awaiting the second installment of Burns’s current serial, X’ed Out, we anticipate its incompleteness. Key to such anticipation is the way Burns encodes trauma, including the trauma to which US comics have been subject, into his work. Using fragmented memories and dreams about a traumatic experience that has befallen the protagonist, X’ed Out reconfigures the European comics tradition (particularly Tintin) in uncertain, heterogeneous relations to Seattle punk, and to postmodern intermedia art. While new plot details may emerge in the next installment, the fracturing effect of the trauma, and the splintered aesthetics expressing it, are what we anticipate.  In creating this kind of expectation, Burns has brought to serial reading a sensibility that can challenge postmodern/popular modes of expectation typical of traditional comics serials while also resisting canonical/literary modes of closure that even now remain tacit standards against which comics are judged.