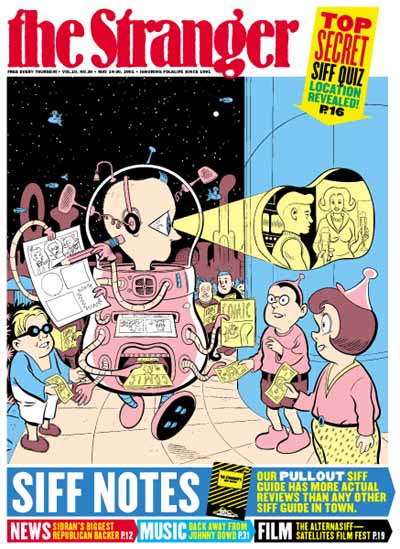 Call for Papers for a proposed panel at the Modern Language Association (MLA) Annual Convention, 5-8 Jan. 2012, Seattle, Washington. Sponsored by the MLA Discussion Group on Comics and Graphic Narratives.

The proposed session would explore how Seattle and its institutions—seminal publisher Fantagraphics; The Comics Journal; independent and minicomix scenes—have transformed contemporary comics and the cultures surrounding it.

Discussion: Seattle is arguably the city that has shaped US comics the most over the past thirty years. The influence of independent publisher Fantagraphics is enormous: Fantagraphics has disseminated the work of many of the world’s most famous contemporary cartoonists, discovering and nurturing young innovative creators in addition to printing established figures in the field. On top of producing, in recent years, key reprint collections by Charles Schulz (Peanuts), E.C. Segar (Popeye) and George Herriman (Krazy Kat), among others, Fantagraphics has championed artists including Crumb, Kominsky-Crumb, Bagge, Burns, Clowes, the Hernandez Bros., Sacco, Tyler, Ware, and Woodring. Fantagraphics also publishes the one-of-a-kind magazine The Comics Journal, the trade venue established in 1976 that through its reviews and interviews showcases the complexity of comics as an art form and filled a deep void in contemporary critical discourse about comics. Further, Seattle is the home of many cartoonists (e.g. Jim Woodring), the setting for many famous comics (e.g. Charles Burns’s Black Hole and Lynda Barry’s Ernie Pook’s Comeek), and a vibrant hub for minicomics, both now and in years past. We welcome papers that propose to study the multifaceted influence on comics of Seattle, its artists, and its institutions.

Possible topics include though are not limited to:

Send 500-word abstracts in .doc or .pdf form to Derek Royal: derek at derekroyal-dot-com. The deadline for submissions is 12 March 2011. Submitters will receive notification of results by no later than April 1.

Please note that this CFP is for a proposed, not a guaranteed, session at MLA 2012, meaning that it is contingent on approval by the MLA Program Committee (which will make its decisions after April 1).

All prospective presenters must be current MLA members by no later than 7 April 2011.

Please feel free to leave comments on this site, or to email Derek Royal (derek[at]derekroyal[dot]com) if you have questions!